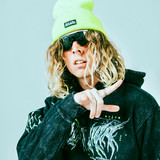 For Jeris Johnson, music is quite literally in his blood. Jeris’ parents are both musical, his dad a drummer and his mom a singer, who met while playing in bands. Jeris grew up surrounded by music, and his parents' unwavering support of his musical aspirations bred a lasting love and passion for music. Music was always second-nature, and Jeris began playing the piano and the drums at the early age of two. At the age of 13, Jeris began rock band camps where he was able to hone his skills as a vocalist and drummer. It was through this experience that he met his future bandmates and decided music was what he was going to do for the rest of his life. Jeris spent his high school years in his metal band, Audiophobia as a vocalist and drummer. Once the band went their separate ways, Jeris was ready to pave his own musical path. Yearning for his own license on creativity, Jeris quickly realized he needed the skillset and software capability to create his own unique sound. It was during these formative years, while Jeris taught himself how to produce, that he also fell in love with the angst and aggression of 'Soundcloud rap’. With influences stemming from Ski Mask The Slump God and XXXTentacion, Jeris began to meld the chaotic energy of Soundcloud rap with the grit of alternative rock creating a sonic melting-pot that would become his signature sound. At 21 years old, Jeris began traveling to LA to perfect his sound. In 2020, Jeris released his most recent single “Damn!”.