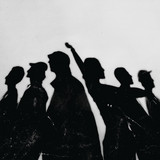 True soul music knows no bound. It is a single point in space with infinite potential. It can go anywhere and upon its going take on new forms and definitions during the journey. 30/70 is a collective of Melbourne-based musicians devoted to truth through sound and the beauty of endless motion. After 5-years of creating together, 30/70 have crafted sonic constellations, connecting dots, thoughts, and culture across the world with their music. Their constellations relay stories, provide direction and document a prodigious process. The local heat of their first release Cold Radish Coma was undeniable. It opened the relationship to Rhythm Section Intl’s Bradley Zero, who would release their critically acclaimed sophomore LP Elevate (mixed by Paul Bender of Hiatus Kaiyote). Initially rooted in jazz, a patchwork of new sounds came to the fore as 30/70 consistently updated as a whole, with the intention of looking to the horizon for their next formation. Suddenly, improvised pockets on stage gave space for new ideas from the UK club scene to take shape and make their way into the repertoire; Break-Beat, Bruk, House, and the ancient Afro-Carribean call and response, where it all began.