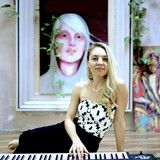 The Soul & Pop singer from Salzburg will be releasing this November her new single "You Ain’t Got Me Waiting", a pop hymn to all women! The video to the single embodies feminine strength, confidence and aesthetics. Maddy Rose' unique and jazzy voice, paired with modern beats, expresses a lot of feel and strength, sounding like "Amy Winehouse meets Billy Eilish" With the age of 18 years Maddy went to London and spent 4 years performing live, writing songs and crafting her musical skills. Whilst performing more than 150 times at events, open mics and music venues she soon got influenced by the London music scene

and developed an unique Soul Pop style. In 2018 she released her jazzy Soul/Pop EP "Blossom" which was played on BBC Radio London and on local Austrian Radio stations. When returning to Vienna she took part in The Voice Austria 2018 and made it to the finals. Moreover Maddy participated in XFactor Germany where the judge Sido named her "one of the best vocals we had on this contest". ​ Now the young singer-songwriter studies with a scholarship on the JAM MUSIC LAB Vienna, a private university of contemporary and Jazz music and is very active in the live music scene in Vienna. From September 2019 onwards she will be performing every Sunday at the Park Hyatt Vienna.