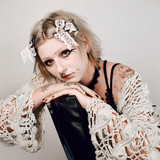 carolesdaughter transmutes turbulence into strangely soothing alternative pop anthems awash in lo-fi glitch, bedroom acoustics, and gutter goth elegance. Like a fairy tale heroine with facial piercings and D.I.Y. spikes affixed to her shoes, the 18-year-old Southern California singer, songwriter, and multi-instrumentalist born Thea Taylor immediately captivates without fear or filter. An outsider since birth, she grew up as one of 10 kids in a strict Mormon household. After seeing a tattoo of the iconic logo, she researched Black Flag online and unlocked the worlds of punk, hardcore, and goth. Bouncing between five different high schools, she started doing drugs, falling down a rabbit hole and taking multiple trips to rehab. On the last trip, she made a promise to pursue music upon returning home and ended up making major waves with the single “Violent” amassing millions of streams on Soundcloud before officially releasing.