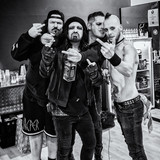 Unzucht is one of the most beloved and successful dark rock bands from Germany. Upon their inception nearly ten years ago, they where pretty much immediately declared „Newcomer of the year 2010“ by the audience of Europe’s biggest dark scene festival M’era Luna. Unzucht has already released six studio albums, with each of them following their debut „Todsünde 8“ in 2012 entering the official German Album Charts – like „Neuntöter“ at #16 and „Akephalos“ at #15. The most recent one, „Jenseits der Welt“, even charted at #9. Unzucht has played hundreds of shows all over Germany as well as dipping into Russia, France, England, Scotland, Austria, Switzerland, Finland and the Netherlands. They toured with Eisbrecher, Puddle Of Mudd and Oomph!, among others, and played some of Europe’s biggest festivals including Wacken, M’era Luna, Summer Breeze, Rockharz, Greenfield, Masters Of Rock, Amphi Festival and more. The current studio album from Unzucht, „Jenseits der Welt“, is out now via Out Of Line Music. The album was recorded by Flo Nowak at Dailyhero Recordings (Emil Bulls, Jennifer Rostock, Itchy) in Berlin and is wrapped in all new artwork by longtime collaborator Heilemania (Kreator, Lindemann, Pain). „Jenseits der Welt“ features a duet with Andy Doerner (Caliban), was accompanied by two new singles and videos and will be promoted by a headlining tour and festival appearances thoughout 2021.