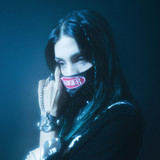 Feminist performance art collective and occasional punk band Pussy Riot made international headlines in 2012 after members were arrested and imprisoned for protesting the re-election of Russian president Vladimir Putin and perceived corruption in the Russian Orthodox church. The group formed in Moscow in August 2011 as an offshoot of the performance/street art group Voina, in response to government policies that discriminated against women. A rotating amalgamation of about 11 members, Pussy Riot disguised themselves with pseudonyms and brightly colored dresses and balaclavas as they staged guerrilla-style performances in public spaces. Influenced by American riot grrrl and Oi! bands as well as French/Bulgarian philosopher and cultural theorist Julia Kristeva, the collective's musical performances combine politically charged lyrics chanted against abrasive guitar riffing, almost always running under two minutes. Pussy Riot attracted international attention after their February 2012 performance at Moscow's Cathedral of Christ the Saviour, where they took to the altar for about 30 seconds and begged in a mock prayer for the Virgin Mary to take Putin out of power, leading to the arrest of members Maria Alyokhina, Yekaterina Samutsevich, and Nadezhda Tolokonnikova, and the fleeing of an additional two members. As of mid-August 2012, the three women were each sentenced to serve two years in a penal colony. The case's combination of censorship and severe response by authorities compelled Russian allies like Garry Kasparov and international figures and organizations from Kathleen Hanna to Paul McCartney to Amnesty International to speak out in support of the collective, but remaining free Pussy Riot members reiterated that the collective will never perform within the capitalist system of the music business, such as ticketed events. ~ Chrysta Cherrie, Rovi