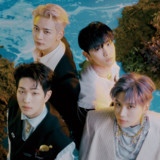 that consists of ‘Shine’ followed by noun ending ‘ee’, which interprets to ‘a person who receives light’. This means a person who always receives light, i.e. the spotlight, encompassing SHINee’s strong aspiration to charm a wide range of music fans regardless of age and region (country) by pursuing a variety of music.