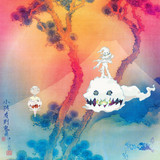 Following years of collaborative exchange, master and apprentice united as the duo Kids See Ghosts, a project created by American rappers Kanye West and Kid Cudi. The pair had a decade of history between them prior to Kids See Ghosts, ever since West signed Cudi to his GOOD Music imprint in 2008. Appearing on each other's respective albums -- as songwriters, producers, and guest artists -- West and Cudi notched a handful of high-profile collaborations, most notably on West's 2008 effort, 808s & Heartbreak, and on Cudi's first two albums, Man on the Moon: The End of the Day (2009) and Man on the Moon II: The Legend of Mr. Rager (2010). Cudi went on to appear on each of West's subsequent releases, even in spite of a brief falling out during West's promotion for 2016's The Life of Pablo. In early 2018, West announced the creation of the Kids See Ghosts project. Issued as part of the monthlong GOOD Music summer releases recorded in Jackson Hole, Wyoming, Kids See Ghosts arrived on June 8, 2018, a week after West's own Ye. A thematic continuation of themes presented on Ye, Kids See Ghosts delved further into topics like mental health and hope. The seven-song set featured guest appearances by Ty Dolla $ign, Pusha T, and Yasiin Bey (f.k.a. Mos Def), as well as samples of Louis Prima's "What Will Santa Claus Say" and Kurt Cobain's "Burn the Rain." ~ Neil Z. Yeung