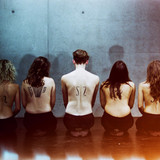 “ALMA. The essence of contemporary alpine folk music” Alma have fitted out traditional folk music in some groovy modern clothes, yet without dressing it up as something it isn’t: Julia, Matteo, Marlene, Evelyn and Marie-Theres play the violin, the double bass and the accordion, they sing and yodel, imbued with cheerfulness and humor, with passion and melancholy. Alma’s music triggers emotions, it comes straight from the soul and wants to reach the listeners in the place where their own roots lie hidden. Ever since they started out in 2011, Alma have been merging genuine folk-music downto- earthness with complex arrangements, traveling up and down music history with effortless ease. Because of the natural way in which classical and folk music, landler and polka, yodel and waltz, bourrée and musette resound side by side, because everything is genuine – the joy, the happiness, the melancholy – and every single note is placed with great respect, always leaving plenty of room for inspiration, Alma’s music is capable of pushing boundaries without breaking with musical traditions. Their debut album Nativa was released by col legno in 2013, followed by their second album Transalpin in May 2015 and 3rd album Oeo in June 2017, both on col legno. Alma was awarded many times, for example: German World Music Award RUTH 2017 Quarterly Critics’ Choice of the German Record Critics’ Award Association 4/2017 (Oeo, col legno 2017) Culture Award, Lower Austria (2017)