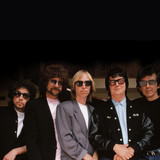 Reversing the usual process by which groups break up and give way to solo careers, the Traveling Wilburys are a group made up of solo stars. The group was organized by former BeatleGeorge Harrison, former Electric Light Orchestra leader Jeff Lynne, Bob Dylan, Tom Petty, and Roy Orbison, thus representing three generations of rock stars. In 1988, the five (who had known each other for years) came together to record a Harrison B-side single and ended up writing and recording an album on which they shared lead vocals. It turned out to be a way to transcend the high expectations made of any of them as individuals, and a delighted public sent the album to number three, with two singles, "Handle With Care" and "End of the Line" hitting the charts. Unfortunately, Orbison died of a heart attack only a few weeks after the album's release. Two years later, the remaining quartet released a second album, inexplicably titled Vol. 3. Although it didn't match the success of the first Wilburys album, it was another million-selling hit. Throughout the '90s, there were rumors of another Traveling Wilburys record in the works, but no new albums from the group surfaced. Harrison and Lynne did re-team in 1995, when Lynne produced and reworked two John Lennon demos with the Beatles for their Anthology rarities collection. The Traveling Wilburys albums drifted out of print in the late '90s, making the 2007 release of The Traveling Wilburys Collection -- a double-disc set containing both albums, plus a bonus DVD -- a noteworthy affair. It debuted at number one in the U.K. and nine in the U.S., eventually earning platinum and gold certifications in the respective countries. In 2016, the collection saw a re-release on Concord. ~ William Ruhlmann, Rovi