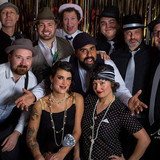 www.thenewgroovement.com What happens when you mix sweet R&B and sultry soul together with a splash of hip-hop, then add a generous helping of funk? You get a genre-bending mash-up of the funkiest, hard-groovin’, booty-shaking dance music that is The New Groovement. Eleven members work their collective magic to create the group’s powerhouse sound. The New Groovement first made waves on the Victoria music scene in 2011 and have since been regularly wowing crowds at the region's biggest festivals, toured Western Canada multiple times, been nominated for Urban Artist of the Year at the Western Canadian Music Awards, won Album of the Year at the Vancouver Island Music Awards, and provided direct support for acclaimed acts such as Booker T. Jones, Five Alarm Funk and Busty and the Bass.