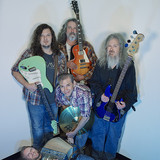 The Meat Puppets’ story begins with three kids, enamored of music and immersed in the psychedelic drug culture of Arizona in the ’70s, who find their way to punk rock and painstakingly become one of the most important bands of the American underground.

At their induction into the Arizona Music & Entertainment Hall of Fame in 2017, the original lineup of the Meat Puppets – brothers Cris and Curt Kirkwood and drummer Derrick Bostrom - joined together onstage for the first time in over two decades. Since the band debuted in the early ’80s, Curt Kirkwood has continually proven himself to be among the most brilliant songwriters of his generation. Time after time, album after album, he’s demonstrated an extraordinary ability to draw upon various roots and rock styles en route to a unique new vision of what the Meat Puppets can be. His latest contributions, especially songs such as “Warranty,” “On,” “Nine Pins,” “Outflow” could be forgotten gems from Nashville, Bakersfield and Laurel Canyon. “The band has been a really, really deep font of creativity,” Derrick said. “Love it or hate it, hit or miss, Curt is just prodigious. They are still living the rock lifestyle; they’re not doing it by half measures. They stayed on the road. These guys are uncompromising. I consider the Meat Puppets to be a national treasure.”