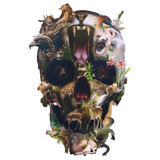 TJ Barrale is a whimsical self-made producer who goes by FIBONACCI. Born in Enid, Oklahoma, his father served in the United States Air Force which resulted in their family moving around from state to state. Growing up, movies played an important role in his life. He collected soundtracks and was enamored with scores- Halloween 3, Requiem for a Dream, and Amadeus were just a few of his favorites. His parents regularly played music as well. The Police, Foreigner, Styx, and Frank Sinatra were just some of his early influences. In High School, he became heavy into hip hop, and a friend introduced him to “chopped & screwed.” He immediately became engrossed with the sound and wanted to be able to “chop & screw” his favorite songs. He started experimenting with Sony’s Acid Pro and not long after was creating hip hop beats for his friends. Today, TJ resides in Springfield, VA where he is a Technical Support Associate for the Association of American Medical Colleges. He owns a shop on Etsy called CLOCKBEAST®️ and regularly posts beats and instrumentals on SoundCloud for artists with varying styles.