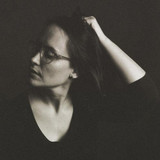 Christina Blust is a singer-songwriter and multi-instrumentalist from northern Kentucky who currently lives and works in Nashville, Tennessee. She brings her accordion, guitar and piano along with her strong, sweet vocals to a number of projects. As one of the members and songwriters of indie-folk band Yearbook Committee (SXSW official showcasing artist 2011, 2012 and 2013), she's toured & released several albums. She also performs with her husband, Jimmy Rinehart. As a solo artist, her music has been described as "library rock" and "wiki-folk." Two songs from her intelligent, elegant full-length 2009 release Sudden Amaryllis were included in the Emmy-award-winning documentary "Baring It All" (2011). The album pulls from life experiences, ranging from post-Katrina relief work (Spilled) to the first day of preschool (Bluebird) to the cancer that claimed her sister at age 32 (Tumor). As a songwriter, Blust pairs thoughtful, evocative lyrics with understated arrangements, such as the aching, expansive Cradle and the sweeping, sweet Drive Me Home. As a performer, she brings strong vocal versatility to each song, from the haunting Dangerous Bird to the raw The Ballad of Eleanor Cecilia Bailly to the rollicking crowd favorites Tall Trees and Arlene. "Blust ... assumes an elegant, poised posture as she strums and begins to sing. Her voice sneaks out of the back of her throat and sounds like a precocious smile as the group attentively tap their feet." -Jimmy Jenkins, Fall 2009