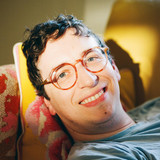 Jerry Paper is Lucas Nathan. Jerry Paper is instant coffee, bullshit jobs, weekly therapy sessions, crises of conscience, corporate mascots, 5meo-DMT trips, jokers down on their luck, surveillance, a jacked dad high on meth at a child’s party, apologies, trash cans, cacti, and the magic of words. From its initial days as a DIY solo synth project in the early 2010s to its current incarnation as a five-piece band, Jerry Paper has always been the earthly conduit for the wild and uncanny imagination of its creative mastermind.