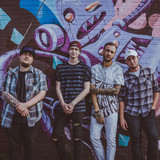 Chin Up, Kid was formed in 2013. The band played many bigger local shows including the 2015 date of the Vans Warped Tour. They self-released two EP's between 2013 and 2016. In late 2016, Chin Up, Kid signed to Standby Records and released their debut full length LP, "Swing With Your Eyes Closed" in early 2017. After heavily touring the US and a few lineup changes, the band evolved into their final form in early 2018 to write and record their sophomore Self-Titled full length record. "Chin Up, Kid" was released June 2018 and landed #43 on the New Artist Billboard Chart and #113 on the Independent Billboard Chat. The band returned from a full US release tour to play the Indianapolis date of the 2018 final cross-country Vans Warped Tour.