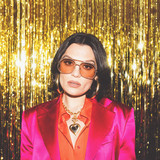 English singer/songwriter Jessie J combines deep, soulful vocals, a sharp pop sense, and a down-to-earth manner that recalls Beyonce, Gwen Stefani, and P!nk. She issued a trio of U.K. Top Five albums -- Who You Are, Alive, and Sweet Talker -- in the early 2010s, while also recording chart-topping singles "Price Tag," "Domino," "Bang Bang," and her cover of "Bridge Over Troubled Water." Born Jessica Cornish in Chadwell Heath, London in 1988, she started her career at the age of 11, performing in the West End production of Andrew Lloyd Webber's Whistle Down the Wind. After studying musical theater at the prestigious BRITS School, she signed a deal with indie label Gut Records, which went bankrupt before releasing any of her music. After building an established presence, she signed to LAVA/Republic Records and began working with Dr. Luke, Atlanta rapper B.o.B, and R&B producer Labrinth releasing her debut album Who You Are & follow up Alive.

Sweet Talker arrived in October 2014, reaching the Top 10 in the U.S. and U.K. She issued a handful of new singles in 2017, including "Real Deal" and "Queen," which were slated to appear on a planned 2018 LP. Returning to her music, she issued the four-part R.O.S.E. album, which arrived in EP-sized chunks over the course of four days in May 2018. Split into R (Realisations), O (Obsessions), S (Sex), & E (Empowerment), the set was produced by DJ Camper. She capped off her busy 2018 with the release of the holiday album This Christmas Day.