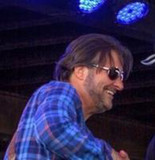 Honky tonker Deryl Dodd grew up in Dallas, TX, where he favored football over music throughout his formative years. When an injury permanently derailed his athletic career, his fellow students at Baylor University encouraged him to begin performing his music in public, and soon he was one of the biggest attractions on the Waco club circuit. After graduating in 1987, he pursued music full-time, moving in 1991 to Nashville to form a band with his friend Brett Beavers. After supporting Martina McBride during her 1992 tour opening for Garth Brooks, Dodd sang backing vocals on McBride's second LP before embarking on a solo career. He also played in Tracy Lawrence's band and sang harmony on records by Radney Foster and George Ducas. After a 1994 demo deal fell through, Dodd issued his debut album, One Ride in Vegas, in 1996. A self-titled effort followed two years later. Shortly after his 1998 album was released, Dodd was planning national tour, opening for Tim McGraw and Brooks & Dunn, but his plans were foiled when he was diagnosed with an acute case of viral encephalitis. Dodd was bedridden for six months, per doctor's orders. He then went through a rehabilitation period lasting a year and a half, during which he had to relearn how to play the guitar. After playing songwriter nights in Nashville, Dodd ditched his deal with Columbia Records in favor of Lucky Dog, a Sony imprint dedicated to Texas music. 2002's Pearl Snaps appeared on Lucky Dog. He returned to Texas, where he was fortunate enough to be invited to record Live at Billy Bob's Texas, which was issued in August 2003. After returning to Texas, things continually went up, including the sales of his 2004 album Pearl Snaps. In 2006, Dodd released Full Circle on DualTone Nashville. ~ Jason Ankeny, Rovi