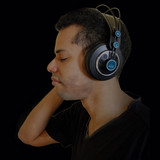 André Godoi, a Electrical Engineering with a Masters degree in Space Engineering, is also passionate about music and soundtrack composition. He started learning music at age 6, where he'd create simple songs. During his adolescence, he would listen to game and movie soundtracks which contributed to build his taste for orchestration and composition of his own themes. At the age of 18, he joined the musical conservatory where he learned about the piano, and from the age of 23 to the present days he has studied composition throught virtual orchestration. Having experienced composing songs for independent musical theater and dances as well as for a short film, he realized that his potential could be directed to major pieces, such as games, movies and corporative work. He has always been fond of working along the director and the production team to guarantee the proper value to his music in the plays of which it is part. His music is characterized by the fact that it tells a story, as a way to connect to the listener, conducting them to the magical abstract world of imagination which leads to the awakening of feelings and emotions that could arouse their interest in art appreciation. A good song is the one that fulfills its role in the work of which it is part, having a harmonic relation with the other artistic elements, as well as being able to invite the listener to dedicate a brief moment of silence and peacefulness, savoring the vibrant and invisible art which is the music.