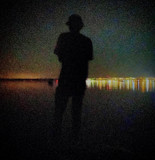 “His sonic world envelops, guiding the listener down surprising twists and passageways.” - Ray Padgett, County Tracks   “Davidson wields space like just another tool in his collection, weighing emptiness against the full force of his musical prowess. Davidson's voice is powerful — though he shows this not through overblown wailing, but rather with control and nuance. It takes a lot of power to sing with this kind of effortless restraint and finely tuned modulation... You can hear that he's hard at work carving out space in a congested artistic arena. His acute sense of structure and dynamics will serve him well on his journey.” - Jordan Adams, Seven Days   “With his gorgeous melodies and mesmerizing voice, at first we were just kind of stunned into silence, which gave way to awe, which gave way to feelings. Lots of feelings. Including the overwhelming need to hear this song again and again.” - Quadio Media