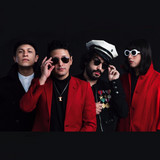 Hailing from Lima, Peru, Los Outsaiders are a quartet with songs that work in all languages. Their classic and modern rock

mix and rollicking shows are the stuff legends are made of. Los Outsaiders have quickly ascended the ranks to become the biggest band in Peru’s indie rock scene.  After forming in 2011, Los Outsaiders caught the attention of Gordon Raphael (The Strokes, Regina Spektor), who produced their first album, Outsaiders (2014). Since then, the band signed with dutch label Zip Records and recorded one album in Mexico alongside Julián Navejas (El Asesino del Rey Peste, 2018) and one album in NYC, produced by Grammy Award winner Rudy Pagliuca, set to release this year. They have also appeared in numerous festivals around the globe (SXSW, Primavera Sound, etc) including Peru’s biggest ones. Because of all this landmarks, to which they add recording the song for Netflix’s Christmas campaign all over Latin America (2019), they were chosen to open for Arctic Monkeys, The Killers, Royal Blood, Foals and The Vaccines when this acts hit the biggest venues in Lima, Peru. Once labeled the most promising band in Peru, Los Outsaiders have become a reality and are ready to take the world by storm.