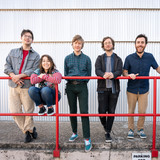 is a feature length film and accompanying soundtrack album out digitally on January 15 and physically on February 26 on Rough Trade. It was scripted from a short story by Pinegrove’s Evan Stephens Hall and directed by Kenna Hynes, & filmed at the band’s long time home in upstate New York, known as “Amperland” to Pinegrove and their fans, prior to the house being sold by the owner in early 2020. The band will screen a ticketed online premiere as a fundraiser for environmental action group The Sunrise Movement on January 13 at 6pm ET for a donation of $5.00 and over. The screening will be followed by a band Q&A moderated by Busy Philipps. Tickets for the screening are available now at Pinegroveband.com along with pre-order for the soundtrack album. The film, produced in conjunction with Chromoscope Pictures, and described by Evan as “fun, hopefully poignant, definitely weird ”, includes 22 songs spanning the band’s entire career to date. Those new renditions of old gems, recorded live in the Amperland house by Pinegrove’s Sam Skinner, will be released as a soundtrack album -