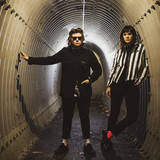 Following in the tradition of the Black Keys and the White Stripes, the Pack A.D. are a guitar and drum duo who play a blend of rock and electric blues. However, their sound has a more substantive hard-rock edge, thanks to the elemental crunch of Becky Black's guitar, the low, forceful murmur of her vocals, and the no-nonsense punch of Maya Miller's drumming. Emerging from the fertile underground scene on Canada's west coast, the Pack A.D. made the most of their minimalism on their sophomore album, 2008's Funeral Mixtape, and they demonstrated they could fill out their approach without sacrificing their keen focus on 2014's Do Not Engage. 2020's It Was Fun While It Lasted was a straightforward meditation of touring that was billed as their final album. The Pack A.D. was formed by drummer Maya Miller and vocalist/guitarist Becky Black, both of whom grew up in Vancouver's Downtown Eastside neighborhood. Black, who began playing guitar at the age of 13, met novice drummer Miller, who was working in the film industry, through mutual friends. They started writing songs together and began playing out in 2006, and soon built a buzz in their hometown for the power of their live shows. The Pack A.D. signed with respected Canadian indie label Mint Records in 2007 and released their debut album, Tintype, the following January. Funeral Mixtape, the duo's second offering, was issued eight months later, and the group toured heavily in support of both releases. After returning to Vancouver, the bandmembers holed up at Hive Studios in their hometown and began tinkering with new sounds. Although still steeped in the blues, the Pack A.D. found themselves drawn to punk and garage rock, both of which steered the sound of 2010's We Kill Computers in a slightly different direction. After 2011's Unpersons, the Pack A.D. took a break from recording, and struck a new recording deal with Nettwerk Productions. For their first Nettwerk release, they recorded sessions in 2013 at Hive Studios, as well as Ghetto Recorders in Detroit, with producer Jim Diamond mixing the final product. The album, Do Not Engage, was released in early 2014. In May 2015, the Pack A.D. issued a four-song EP, Meta Animal, which proved to be their last project for Nettwerk. In 2016, the duo struck a new record deal with Cadence Music Group and, after teasing with the hard-rocking single "So What," released their sixth studio LP, Positive Thinking, in November of that year. Just 11 months later, in October 2017, the Pack A.D. were back in the saddle with 2017's Dollhouse, which they supported with a tour of Canada and the American Midwest. In April 2020, the Pack A.D. released It Was Fun While It Lasted; in the press materials for the record, the duo stated that it would be their final album. The musicians insisted they were not breaking up the act, though they were done with extended touring. ~ Andrew Leahey & Mark Deming, Rovi