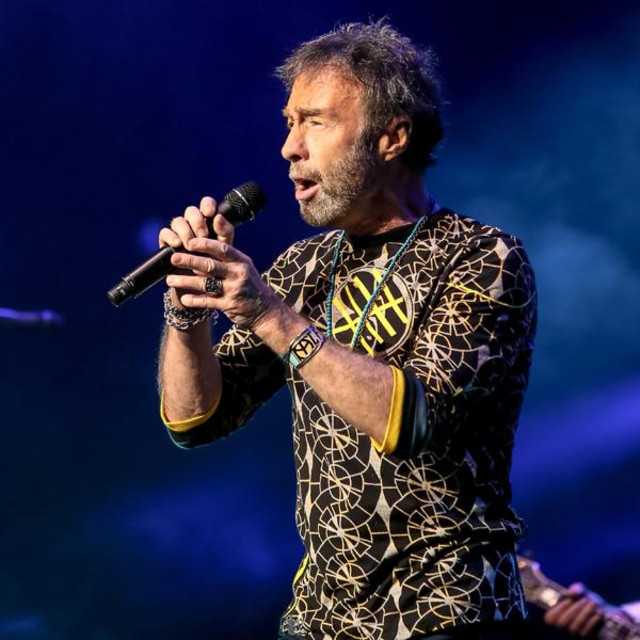 In a career that spans many decades, vocalist, guitarist, and songwriter Paul Rodgers and his various groups have sold in excess of 125 million records around the world. Best known for his expressive vocals on songs that have become rock & roll staples, like "All Right Now," "Feel Like Makin' Love," "Can't Get Enough," and "Rock 'n' Roll Fantasy," Rodgers has been cited by dozens of 1970s and '80s rock groups and musicians as a major influence. U.S. groups like the Black Crowes and Guns N' Roses have cited Rodgers and his various groups -- Free, Bad Company, the Firm, the Law -- as an influence on their styles. As a vocalist and songwriter, Rodgers had great admiration and respect for the classic African-American blues and R&B vocalists. Rodgers credits his father for buying him a guitar in his youth, but he later taught himself bass and piano as well. He began writing songs when he was in his early teens, before he had mastered any instrument. Rodgers began playing out in clubs around Middlesborough, in northern England, when he was 13, taking singers like Rod Stewart as his role models. Right after he left school, he set out for London in a van with a band called the Roadrunners. The van broke down en route, and while the other members hitchhiked back north, Rodgers went south to London. After a short time he returned home to his parents, who were supportive of his musical endeavors. But having seen the club scene in London, he became determined to go back and make his mark there. Returning to London, he formed the blues band Brown Sugar, deciding to see how far he could go as a vocalist, songwriter, and guitarist. In the mid- and late '60s, London was in the midst of a huge blues revival, and Rodgers had the opportunity to see Muddy Waters and dozens of other American blues musicians perform at London's Marquee Club and other blues and R&B venues. Seeing Waters live had a lasting effect on Rodgers, and his early experiments, Brown Sugar and Free, started out as blues bands. Rodgers was working with Brown Sugar when guitarist Paul Kossoff heard him sing. Kossoff was so impressed with Rodgers' voice that the two decided to create a new band, joined by Simon Kirke on drums and bassist Andy Fraser. After seeing them at the Nags Head Pub in Battersea, Britain's godfather of blues, Alexis Korner, suggested they call themselves Free. A song Rodgers co-wrote with Fraser, "All Right Now," hit number one in 20 territories around the world in 1970. The song remains a rock staple, having been entered into ASCAP's "One Million" airplay singles club. By the early '70s, Free was one of the biggest-selling British blues-rock groups; by the time the band dissolved in 1973, they had achieved an uncanny level of superstar success: they had sold more than 20 million albums around the world and had played more than 700 arena and festival concerts. In 1973, Rodgers formed Bad Company, then a prototype "supergroup," with King Crimson bassist Boz Burrell, Mott the Hoople guitarist Mick Ralphs, and Free drummer Simon Kirke. But this time, Rodgers learned from the mistakes he'd made with Free; he was determined to have bandmates who shared his musical vision -- the overnight success that Free experienced put undue pressures on the personalities in the band. Rodgers contacted Peter Grant, Led Zeppelin's notorious manager, who was fortuitously starting Swan Song Records, the group's vanity label. By the close of the 1970s, Bad Company had recorded six multi-platinum albums, which spurred classic blues-rock and rock staples like "Can't Get Enough," "Feel Like Makin' Love," "Shooting Star," and "Rock 'n' Roll Fantasy." By the time Bad Company called it quits, they had played to over ten million people around the world and sold 30 million albums. Other highlights of Rodgers' career include a showstopping version of Otis Redding's "(Sittin' On) The Dock of the Bay" at Atlantic Records' 40th anniversary party at Madison Square Garden in 1988, and his formation of a new group with Jimmy Page of Led Zeppelin, the Firm, in the mid-'80s. Following that band's two albums, Rodgers formed the Law with former Small Faces/Who drummer Kenny Jones. Since the early '80s, Rodgers has also released a number of solo albums. They include Cut Loose (1983) and The Morning After the Night Before/Northwind (1984), both for Atlantic Records. His 1990s output includes Muddy Water Blues: A Tribute to Muddy Waters (1993, Victory Records) and The Hendrix Set, a mini-CD released that same year. Muddy Water Blues was nominated for a Grammy and features guest performances by Slash, Richie Sambora of Bon Jovi, Jeff Beck, Steve Miller, Buddy Guy, and Pink Floyd's David Gilmour. Rodgers then put together a backing band featuring guitarist Geoff Whitehorn, bassist Jaz Lochrie, and drummer Jim Copley, recording Paul Rodgers Live (1996) and Paul Rodgers Now (1997) for the New York-based Velvel Records. After a Bad Company reunion in 1999, Rodgers switched over to CMC International, issuing the album Electric in 2000. Taking a break from his solo career in the middle of the decade, Rodgers joined Brian May and Roger Taylor in a version of Queen for some live shows, one of which was documented on 2005's Return of the Champions, a double disc on the Hollywood label. In 2007 Eagle Rock Entertainment released a new solo album, Live in Glasgow, taken from a October 13, 2006, concert at Clyde Auditorium in Scotland. Released on both CD and DVD, it highlighted both Bad Company and Free material, some of which Rodgers hadn't performed in 35 years. Rodgers continued to perform live with Queen through the end of 2009. Not long afterward, he reunited with Bad Company for a 2010 tour that was documented on two separate live releases. After this, Rodgers turned to his solo career, releasing a collection of classic soul covers called The Royal Sessions early in 2014. ~ Richard Skelly, Rovi