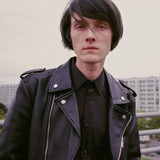 Marakesh are a Berlin based indie rock band, originally from Ukraine. Formed in 2006 and named by Billboard as “solid and manifestly eclectic sound”, the band soon appeared in the Grand Theft Auto IV soundtrack, reaching over 1,5 million views on YouTube. This led the band to a lot of touring, including open air festivals and a support slot for Placebo. After moving to Berlin from Ukraine and taking a long pause, Marakesh are now coming back with their new international line up and new EP 199X, recorded at Turmwerk Studios (IAMX, Jim Abbiss) out February 2017.