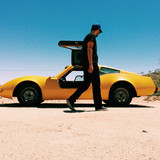 Seth is also known for his work with post minimalist mastermind Rhys Chatham, Swans founder Michael Gira, as well as collaborations with a wide range of master musicians from Hamid Drake and William Parker to Oneida, Keiji Haino and Tatsuya Nakatani. Cy Dune began in 2012 in the Sonoran Desert outside of Tucson, AZ when alongside Lightning co-founder, conceptual artist and musician Ali Beletic, the two began again artistically in the sun and raw ancient Americanism of the desert. There he recorded his critically acclaimed first ep No Recognize and Desert LP, and first married the primitivist poetic powers of the American blues mythology with the religious rock power envisioned by Patti Smith and the 70’s NYC art/punk movement. He is currently working on the new Cy Dune Minimalism LP out of Lightning Studios which is currently situated near the ocean in Southern CA, as well as producing various musical projects and composing music for film.