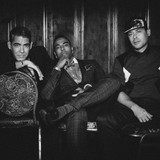 Established in Paris, France prior to scattering across Europe, Orishas are a pioneering Cuban rap group who have covered a range of topics including immigration, identity, racism, and Afro-Cuban religion. After debuting in 2000 with A Lo Cubano, an internationally acclaimed full-length, their subsequent work throughout the decade advanced their fusion of Latin rhythms and melodies with hip-hop. Embraced across Europe and warmly welcomed back home, they released a total of four studio albums, as well as the Latin Grammy-nominated 2007 compilation Antidiotico, prior to disbanding in 2009. They resumed several years later to record in Cuba for the first time. This activity led to the 2018 album Gourmet, on which the group were joined by an extensive, cross-generational cast of contemporaries.

Originally comprised of Roldán (born Roldán González Rivero), Ruzzo (Hiram Riverí Medina), Yotuel (Yotuel Omar Romero Manzanares), and Flaco-Pro (Liván Nuñez Alemán), Orishas formed in Paris, France, in the late '90s. Ruzzo and Yotuel were previously members of Amenaza, a crucial group in their own right. In collaboration with producer Nicolas Nocchi (aka Niko Noki), Orishas made their full-length album debut with A Lo Cubano (2000), a groundbreaking Latin rap album that fused Afro-Cuban rhythms, hip-hop beats, melodic singing, and socially conscious raps to international acclaim. The full-length began a long-term association with the Universal Latino label. More importantly, it led to the group being welcomed back to Cuba for a pair of triumphant concerts with attendance reportedly in the tens of thousands. Reduced to a trio after the departure of Flaco-Pro, Orishas refined their musical fusion on their second album, Emigrante (2002), which was more melodic than their debut, to the chagrin of some fans who favored the group's rapping to their singing. El Kilo (2005), the third Orishas album, was a further refinement of the group's steadfast approach. Moreover, El Kilo continued to broaden the group's popularity, particularly in Europe, where the album charted in France, Belgium, Switzerland, Spain, and Portugal. A triple-disc CD/DVD compilation, Antidiotico (2007), was subsequently assembled and was nominated for a Latin Grammy award in the category of Best Urban Music Album. Cosita Buena (2008), the fourth Orishas album, followed a year later and again found the group evolving musically. After lengthy touring that took the trio to numerous music festivals in Latin America and Europe, Orishas went silent with each of its members living in a different European city and pursuing individual songwriting, producing, and arranging projects. The group resumed activity in 2016 with performances and recordings, including the single "Cuba Isla Bella," recorded in Cuba with contributions from Gente de Zona, Leoni Torres, and Descemer Bueno, among others. A handful of additional singles led to Orishas' fifth album, Gourmet (2018). Issued by Sony, the full-length was similarly collaborative, with the guest list including Jacob Forever, Franco de Vita, Silvestre Dangond, Beatriz Luengo, and Madcon. ~ Jason Birchmeier & Andy Kellman, Rovi