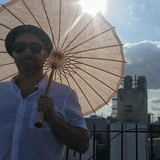 Calotype is the project of New York City singer/songwriter/multi-instrumentalist Larry Hess. Following the breakup of his band Hunters, Run! in 2011 Hess began the Calotype project in which he played all of the instruments on the debut EP Coastal Preferences. The success of this led Hess to form a live band, which in turn began recording as Calotype with Hess performing the production and mixing duties. To date the band has released 4 eps: Coastal Preferences (2012), Our Initial Descent (2013), Decades (2014), and Infancy (2017). In 2016, Calotype released Good Graces, their first full length album. 2018 saw them release two stand alone singles "Future Tense" and "The London Solstice Song". In late 2018 they followed this with the more electronic oriented full length Zona. In March 2020 they released their third full length, Hosts and Ghosts. This was a return to the more indie/folk rock direction of their earlier EPs.