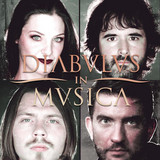 If the passion for classical music is mixed with the rawest metal, the result will certainly be something like Diabulus in Musica. This band, the most important of the genre at national level and one of the most recognized at international level, has been spreading its music in Europe since 2010. Its debut album was released worldwide under the American label Metal Blade Records. Then, they signed with one of the most important rock and metal companies today: Napalm Records (Austria). With them they have released four studio albums (the forth is going to be released next month!) that have led them to intensively tour around Europe. Its music transports the listener to lost worlds and thrills with its delicate operatic passages, rough grunts, epic choirs, orchestral interludes and the most aggressive metal. A modern and ground-breaking bet and an overwhelming live that will not leave the audience indifferent.