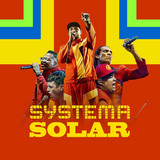 The band emerged from the underground and conquered all in its path with its raw and true approach of originality. Throughout the years, Systema Solar have expanded to become more than just music. They operate as an audio visual collective that engages all the senses of attendees through their shows. They classify the experience as Berbenautika, which to put it in simple terms means that through their music they create an imaginary state of bliss in where they are the cosmonauts traveling and spreading thumping Caribbean parties.