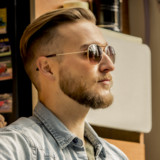 Montreal-based singer-songwriter Oliver Charles comes from a musical family. Charles discovered his passion for music in his teens and taught himself the piano and the guitar. Now a song-writing graduate, he learnt everything between arranging, composing, singing, recording and producing. ​ Oliver Charles developed his song writing skills, collaborated with multiple producers, performed in musicals, bars and festivals and learned about the industry by networking between Montreal, Toronto and Paris.

Often inspired by romance, Charles leans towards pop-folk music that co-exists with personal stories, often delivered with a vulnerable, yet dynamic and powerful voice. Although he used to be a shy and sensitive kid, writing music is what gave him confidence and shaped his personality. “A lot of the artists I admired growing up had a way of writing about love and being transparent about their personal experiences. It makes sense that my first album has the same intention and vintage appeal to how it sounds.’’ said Charles. ​ Since 2017, Charles has released several singles. His fans’ support was key to his success as his songs have now cumulated over 1 million digital streams. ​ After an intense recording period alongside the well-respected producers The Grand Brothers, Charles is getting prepared to release his debut album in the next coming months. Pre-save Oliver's new single "The Sweat" here: https://bfan.link/the-sweat-2 https://www.olivercharlesofficial.com