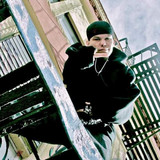 Sean Strange, born and raised in Queens, New York is an American Hip Hop Artist, Producer and Owner of Nah Bro Entertainment Inc. Even though he started writing lyrics and learning to produce beats at the age of 14, he has been developing himself on multiple levels for the past 15 years. From the year 2008 to the present day Sean has released 14 projects including 3 in chain stores worldwide. Today he finds himself a seasoned independent artist and label owner with over 500 live shows under his belt from America to Canada and Europe. In addition to his wealthy show resume, Sean has been part of and responsible for the sale of over 100,000 records worldwide and 15 Million + views on You Tube based on his solo effort and collaborations with Snowgoons, D12, Papoose, Kool G Rap, Saigon & more. Many of his fans relate to him on a level where they have tattooed his name, lyrics or artwork on their bodies. He has appeared on numerous legendary records and has worked with big names in the Hip Hop scene. After founding his own label "Nah Bro Entertainment" he formed a joint venture with the legendary label Def Squad. Big things are to come and the fans are excited to finally get to hear Street Urchin 2 in March 2019.