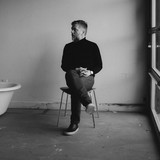 Raised in the small town of Akureyri in the north of Iceland, Atli Örvarsson relocated to Los Angeles early on to pursue a career in composition. There, Atli worked extensively alongside prolific TV veteran Mike Post and Hollywood legend Hans Zimmer, which launched his career leading him to score over 40 films and countless TV shows. In 2014, Atli felt a calling to move back to Iceland and reconnect with his roots. Soon after, he started building up a studio complex in Akureyri and began his collaboration with the ‘Sinfonia Nord’ Orchestra, which has performed on many world-renowned films and productions. Since returning to Akureyri, Atli has felt his most inspired. Once a place he yearned to escape, his hometown has now become a lifeblood for inspiration and inner peace and a catalyst in the inception of his debut album. This notion of having gone ‘full-circle’ led Atli through a process of self-reflection to discover himself and his own musical identity. Up next for the composer is the new Apple TV+ limited series Defending Jacob starring Chris Evans—premiering April 24th, as well as The Hitman’s Wife’s Bodyguard releasing in summer 2020. Atli is releasing his debut album as a solo artist on 3rd July 2020 on INNI Music, with singles being released in April, May and June prior to the album release.