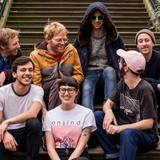 Over three years since the release of the critically-acclaimed ‘Mysteries’, East London’s Tigercats return with their much anticipated follow-up, ‘Pig City’ – a record that builds both musically and lyrically on their work to date. Almost completely self-recorded and produced by bassist Giles, ‘Pig City’ hears a broadening of the band’s indie pop influences, expanding into highlife, afrobeat, and scuzzy West African psych. Sonically more aggressive, ‘Pig City’ is the sound of a band directing their anger at the incessant gentrification of East London as developers close in on the studio they call home. Tigercats’ third record, and first with Barcelona label El Segell del Primavera, ‘Pig City’ is the sound of a band unafraid of changing a winning formula – with the results fierce, bold and powerful.