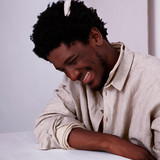 Labrinth is a multiplatinum-selling singer, songwriter, producer, and composer of one of 2019’s biggest shows, HBO’s Euphoria.

In addition to lending his singular, genre-blending sound to the series, Labrinth wrote and performed the show's finale-capping song “All For Us,” featuring Zendaya, which won an Emmy for Outstanding Original Music and Lyrics for. His score has also recently garnered an Ivor Novello win for “Best Television Soundtrack” and a further Emmy nomination for Outstanding Music Composition for a series (original dramatic score). The score soundtrack has so far generated over 600 million streams worldwide. As a solo artist, Labrinth is best known for global hits including "Jealous", which to date has garnered over 415 million streams on Spotify alone. Labrinth is one third of supergroup LSD, alongside Sia and Diplo, whose titular debut album has garnered over 1 billion streams worldwide in the year since its release. He has collaborated with Beyoncé, co-writing and co-producing the Golden Globe and Grammy nominated song “Spirit”, the lead single in Disney's 2019 live-action The Lion King. Other artists he has collaborated with include Nicki Minaj, Eminem, The Weeknd, Ed Sheeran, and Kanye West on the album Jesus is King. Labrinth's most recent album Imagination & The Misfit Kid includes the singles “Miracle", "Mount Everest" and the aforementioned "All For Us".