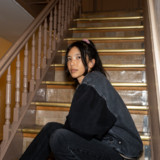 Ana Roxanne is an American musician based in New York. Her self-released EP was later reissued by Leaving Records before signing with Kranky for her official full-length debut, 2020's Because Of A Flower. Working at the interzone of electric meditation, dream pop, and ambient songcraft, her inspirations span the secular (R&B divas of 1980's and 90's) and the spiritual (Catholic choral traditions in which she was raised), synthesized into a uniquely intuitive sonic language, equal parts atmospheric and ancient, healing and hermetic.