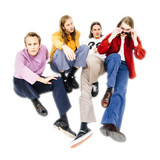 During an eurotrip three boys decided to start a band together and write one song in each city, in a park in Milano they decided to take the name Milano Sun. After releasing their single "Already Gone" in 2012 they immediately gained recognition from both national and international critics although what started out as a story of three friends starting a band on a bench in Italy, slowly faded away and shortly after their debut EP “Scandinavia” the band was put on ice. While taking some time apart the members worked as producers in the famous “Ingrid-studio”, founded by Lykke Li and members from Miike Snow and Peter, Bjorn &amp; John, and collaborated with some of the biggest artists in Sweden both as producers as well as musicians. During the time spent working with others the band recruited a drummer, Zackarias Ekelund from Maasai, and recorded the new album. Today Milano Sun consists of David Axelsson, Johan Jonasson, Love Sivik and Zackarias Ekelund.