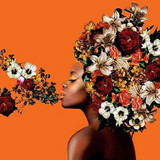 Miss Baby Sol is a Congolese-born British singer/songwriter. In 2011 Baby Sol released her debut solo recording ‘Before I Begin (The Journey)’. ‘Always’ was the 1st single, released as a dub-step remix by Stinkabell, then ‘No No’ which was included in the ‘Untold Songs: Vol. 1’ album, to raise awareness and funds for Amnesty International's ‘Stop Violence Against Women’. The 3rd single ‘She Cries’ was released as an EP in support of Amnesty International. In 2012 Baby Sol collaborated with Swindle to record ‘Some Unholy War’ as a contribution to the Amy Winehouse tribute album ‘Back to Back to Black’. She can also be heard on the outro of Ray Davies & Paloma Faith’s version of ‘Lola’. In 2014 she co-wrote and sang ‘Now’s The Time’ released for the ‘No More Page 3’ campaign. Her follow-up solo

social commentary compositions include 2015's ‘The Future’ featuring Speech Debelle, and ‘On The Dole’. Her co-writer and vocal work spans the music genres of dance, electronic, folk, hip hop, house, indie rock, jazz, rap and soul, and include the releases; ‘Lost In Your Love’ (2012) with UK producer Redlight, ‘Get Down’ (2013) with UK duo Torqux, ‘Crossing’ (2018) with UK artist Lazy Habits, ‘London Girl’ (2018) with Dutch DJ and producer Sander Kleinenberg, ‘Better Days’ with UK musician Shay D (2018), ‘Bouge’ (2019) with Ukranian DJ and producer Sagan, ‘Basement' (2019) with New York City DJ and producer Dean Mickoski. “Your voice sounds like Miles is playing it” ~ will.i.am