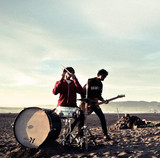 Transcontinental creative lab Wildlife Control blur the lines between visual art, music, and technology. Their aesthetic combines sampled and synthesized sounds and visuals in an alchemical mixture that is best summarized by the final words of their debut release: it doesnʼt matter if sheʼs analog or digital. “Wildlife Control has captured the spirit of the continuous and constantly evolving future of music video.” – WIRED “Wildlife Control is youthful yet insightful. It feels like lying by a pool you broke into, young and drunk, next to someone you loved while looking at the stars knowing in your heart the world has a fuck ton more in store for you.” – VICE “Particles has three movements — Illusion, Subtract, and Creature. Each on its own is compelling, but when digested together, the album is a tailor-made listen for losing oneself.” – POPULAR SCIENCE “Wildlife Control are writing classics. ‘Analog or Digital’ is vaguely Ramones, vaguely Phoenix, wholly a triumph in rock that might be considered indie, and entirely awesome. It’s a must listen.” – INDIE SHUFFLE live photography: Eric Hwang