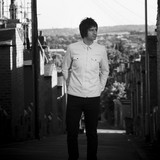 Indie solo singer-songwriter, mixing retro folk with catchy guitar hooks and rootsy, raw acoustic anthems.   Influenced by artists such as Bob Dylan, Paul Weller, The Small Faces, The Band, Bruce Springsteen, The Stones and The Beatles, Declan McNulty is a UK based solo artist who writes songs rooted in real life experience, inspired by every-day observations and composed of characters and situations that encountered along the way.   These stories are set to catchy guitar heavy blues sounds, hook laden chilled out sing alongs or rootsy, raw acoustic driven numbers.   An accomplished multi instrumentalist playing with many different bands over the years, Declan has honed his craft contributing bass, harmonica, guitar amongst other things to the sound of several groups over the years.   Having spent so long on the side of the stage, Declan turned his hand to songwriting and after receiving a positive reaction on the local music scene, wrote over an albums worth of material in under a year and decided to go solo. His forthcoming EP is a true solo effort with Declan playing all the instruments on all the self penned compositions.   The first single from the album, “She’s Got A Load” was released on 1st Aug 19, with new single "The Man Who Didn't Know" released 3rd Jan 20. The EP due out later this year.