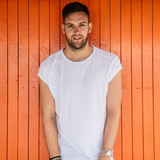 Keeping his true identity under wraps, Chicago-born Secondcity's melodious brand of house swept the U.K. charts and airwaves in 2014 with his track "I Wanna Feel." Growing up with the sounds of classic house and garage, his productions fit seamlessly with the chart-house revival that saw the likes of Disclosure, Route 94, Duke Dumont, and others ride the charts from 2012 onwards. After posting the track "Got to Believe" on Soundcloud in 2013, the mysterious Secondcity steadily released remixes and tracks for labels such as Dirtybird, Defected, and Saints & Sonnets. "I Wanna Feel" earned him a deal with Ministry of Sound, who licensed the track for several compilations and a mainstream release, leading to further exposure and recognition. ~ Aneet Nijjar, Rovi