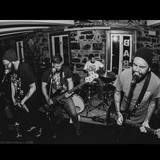 The whole thing started up back in 1999... Born from the ashes of an unnamed hardcore project, David and Mark, influenced by bands like Hot Water Music, Small Brown Bike and LeatherFace, decided to switch to a less aggressive and more rock sound. With Aaron on drums, the band spent the next two years in the garage writing songs that would be dumped after a few weeks... then writing new ones... then dumping them... then...   At the end of 2002, Jeffrey Lost Control started to play gigs with a local band called the Risk of Fire, but that band splitted up and the guys decided to hire their singer/lead guitarist Fred.   In 2003, after a few shows in the Quebec area, the band break up due to a lack of motivation and equipment. David and Fred started a band called My Brightest Star while Aaron and Mark tried to keep Jeffrey alive for a couple months.   In 2005, My Brightest Star splitted up and Jeffrey Lost Control awoke from a two years coma with now two members from the recently deceased band (Eric and john).