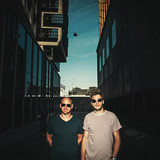 Joysticker is an electronic music duo formed by Jasper Vergeer and Stijn Kessens. After several years of sound-shaping in their Amsterdam-based studio, out came an eclectic blend of warm synthesizers, pulsating guitar plucks and silky vocal melodies. Although first starting out playing acoustic singer songwriter music, the long time friends gradually discovered a common love for electronic music. Inspired by artists such as Electric Youth, The Postal Service and Deadmau5 they went in search of a way to incorporate similar elements into their sound. They decided to extend their musical palette to electronic production. While reinventing themselves as producers, the duo held on to two basic principles.. soothing vocals should be in the center, and their songs should remain real songs, regardless of productional style.