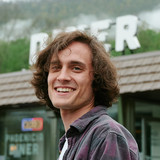 Darryl Rahn is a 27 year-old singer, songwriter, multi-instrumentalist, and producer living in New York. He has been writing and performing original songs since 15, grabbing the attention of one listener at a time. His most recent record, “Going Steady,” was his most personal yet. Songs like “Cash Only” documented the nervous energy surrounding a first date, while others like “Now That You’ve Seen My Shadow” discussed the inevitable dark side of human nature in a relationship. For fans of: Andy Shauf, Christian Lee Hutson, Christian Lee Hutson, Fenne Lily, Dawes Photos by AC Demarco @darrylrahnmusic darrylrahn@gmail.com