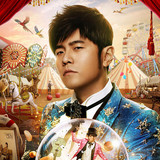 Dubbed "the New King of Asian Pop" by a 2003 cover story in Time magazine's Asian edition, Taiwanese singer/songwriter/multi-instrumentalist and actor/director Jay Chou has sold millions of albums and concert tickets since his 2000 debut album. Born Chou Chieh-lun in the Linkou District of northern Taiwan, he began piano lessons at age four and cello lessons in grade school, instruments he continued to study formally through his teens, when he also began writing songs. An appearance on Super New Talent King in 1998, where he accompanied a friend on piano, led to a job offer by the show's host, Jacky Wu, as a contract composer for Wu's label, Alfa Music. After learning his way around a music studio and stockpiling songs, Alfa released Chou's first album, Jay, in 2000. With both Chinese and Western pop, R&B, and his classical training all informing his music, his style -- along with the help of high-profile promotion by TV personality Wu -- generated hits throughout Southeast Asia from the beginning. His sophomore album, Fantasy, came out in 2001 and fortified his stature as a popular and award-winning Mandarin-language songwriter and recording artist. His third album, 2002's The Eight Dimensions, was followed by his first live album, The One: Live, which was accompanied by a concert DVD. In 2003, he released Ye Hui Mei, named for his mother, and a year later his fifth studio album, Common Jasmin Orange. Another live album and concert DVD, 2004 Incomparable Live, followed, and 2005 saw his film debut in the drift-racing action film Initial D, along with his first greatest-hits collection, Initial J: Jay Chou Greatest Hits. Chou continued to hit the charts with November's Chopin and Still Fantasy in 2006. In 2007, he made his directorial debut directing himself in the music-themed drama Secret. He co-wrote the soundtrack, comprising instrumental score and songs, with Thai musician Therdsak Chanpan, and issued the soundtrack on his own newly formed JVR Music label. His eighth full-length studio album, On the Run, was released via JVR in late 2007, followed by the live album and concert DVD Jay 2007: The World Tours. Capricorn arrived in 2008, with The Era appearing in 2010. The Era 2010 World Tour was released on audio and DVD in January 2011, just before his Hollywood acting debut (with Seth Rogen and Christoph Waltz) in Michel Gondry's The Green Hornet hit theaters in Taiwan. His 11th studio album, Exclamation Mark, was issued later that year, and Opus 12 followed in 2012. Not one for taking much time off, he directed himself in the 2013 action film The Rooftop, then released Aiyo, Not Bad in 2014. In 2015, he married Taiwanese model and actress Hannah Quinlivan at Selby Abbey in Yorkshire, England, drawing much attention from the Mandarin entertainment press. ~ Marcy Donelson, Rovi