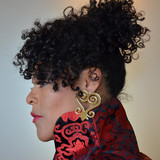 Montreal based Singer/Songwriter Dawn Tyler Watson, has earned her place among the International Blues elite. Her fiery stage presence and soul-stirring performances have won her countless nominations and awards including multiple Canadian Maple Blues Awards for Entertainer, Female Vocalist, Best Recording, & Songwriter of the Year. Among her many accolades her fifth and latest album “Mad Love,” was awarded the JUNO Award in 2020 for Best Blues Album as well. A consummate entertainer whose performances always move the spirit, her style is an eclectic influence of Jazz, Soul, and Gospel that pushes the boundaries of traditional Blues into a whole new dimension. With five albums and over 25 years of touring across five continents, Watson has left a trail of fans. She has shared the stage with an array of premiere artists, including Jeff Healy, Koko Taylor, Alberta Adams, and Cyndi Lauper. "Dynamic and utterly captivating...Watson’s voice is a marvel." Elmore Magazine