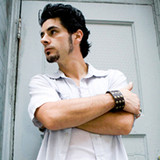 Alex James Muscat is a San Francisco based singer/songwriter. In 2019, Last Stop Records released 'Thornton Beach Vista' which is the follow up to 2017's 'Desire Paths'. Both are available worldwide through the usual digital outlets. "For many years, I have enjoyed the privilege of recording creative albums and playing in diverse and challenging musical groups. Soundtracks is a collection of instrumental works I composed and produced in a few years time. Many hours were labored to put together this special album of emotional melodies and modern composition. A milestone in my musical evolution."