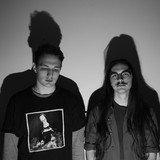 “Falling somewhere between Kurt Cobain and emo fame” is The Standby, according to Alternative Press. The Pennsylvanian group quickly became a dynamic across the midwest; after their debut single Wintersun (Gary Cioni; Grayscale, Kayak Jones, Free Throw) found traction on Spotify playlists, premieres via Dreambound & Alternative Press last spring. Not staying quiet for long, The Standby dropped singles Constant Nausea & Drawing Out The Hurt, solidifying their ability to bring something fresh to an otherwise stagnant subgenre. Their highly anticipated EP Over, Under continues to deliver a massive soundscape; that is both highly energetic and tragically somber, creating a pallet that any alternative music fan can easily take from and enjoy. The band fuses elements of some of the scene’s most cherished classics (Thrice, Thursday) with more modern stylings reminiscent of some of today’s newer powerhouses (Casey, Movements, Can’t Swim) to form a perfect storm of genre-bending.