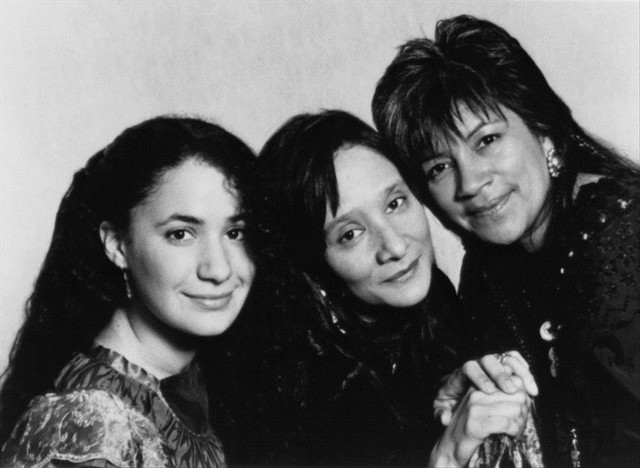 Ulali is one of the first groups to fuse Native American musical influences and modern influences. In addition to appearing at Woodstock 1994 and the opening ceremonies of the Olympic Games in Atlanta in 1996, the three-woman group has contributed to the soundtrack of such films as Smoke Signals (the winner of the Audience Choice and Filmmaker's Trophy at the Sundance Film Festival in 1998) and video documentaries including The Native Americans. Ulali's concert video, Follow Your Heart's Desire, received an award as Best Music Video at the American Film Festival. Two of their songs, "Mahk Jchi" and "Ancestor Song," were featured on the album Robbie Robertson and the Red Road Ensemble. Ulali traces its history to a seven-person group that performed, prior to 1987, under the name Pura Fe. A singer, composer, teacher, poet, dancer, actress and member of the Tuscarora tribe, Fe had previously studied with the American Ballet Theater and Martha Graham Dance Troupe, sung with the Mercer Ellington Orchestra and appeared in numerous Broadway productions. Fe's debut solo album, "Caution to the Wind," reflected her roots in R&B. With the group pared down to three women in 1987, Ulali consisted of Fe, long-time collaborator Soni Moreno and Fe's cousin Jennifer Elizabeth Kreisberg. A member of the Mayan, Apache and Yaqui tribes, she studied at the American Conservatory Theater in California and played the role of Chrisie in the original San Francisco and New York productions of Hair. In addition to performing with Ulali, Moreno is a member of the board of directors of the American Indian Community House in New York. Kreisberg, who represents the fourth generation of singers in her family, is a founding member of the Native American Scholarship Fund at Lynchburg College in Virginia. Ulali has collaborated with such Native American performers as Rita Coolidge, John Trudall, Floyd Westerman and the Silver Cloud Singers. In addition to singing harmonies on the Indigo Girls recording "Shaming of the Sun," the trio was the opening act for the Indigo Girls' Honor the Earth Tour. In 1997, Ulali provided the musical accompaniment for a recording by Lakota/Kiowa/Apache storyteller Dovie Thomason, "Lessons From the Animal Kingdom," that received Editors' Choice and Notable Recording awards from the American Library Association. Ulali's second album, scheduled to be released by Columbia Jazz in the fall of 1999, is being co-produced by Branford Marsalis. ~ Craig Harris, Rovi