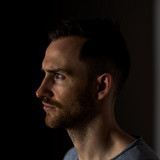 In the obscure twilight zone between fascination and obsession is where you’ll find the music of unconventional producer, Grün Glas. Skirting the fringes of electronica and techno, his music is an experiment in controlled entropy - with a sweet-tooth for a saccharine pop melody. Specialising

in music cognition and perception for his Music Tech MA, Grün Glas is a self-confessed music-nerd with a penchant for listener manipulation. So, tread with caution. Citing Jeff Buckley, Amon Tobin and Ayn Rand as some of his greatest creative influences, he is often surprised by the direction his tracks take. However, being more interested in the process rather than the finished product, these surprises are always acknowledged as the authentic outcome of an idea thoroughly explored. Hopefully. Having released “Border” in 2017 closely followed by well received EPs “Rust” and “Poison/Polyester,” Grün Glas has spent 2018 recording new material in Thailand and at home in his Berlin studio. With single “Void” dropping on September 21st, you can expect a deluge of fresh, compelling music to make its way into your ears in the near future. If you want to stay in the know, just sign up for the Grün Glas newsletter, or follow him on Insta or FB.